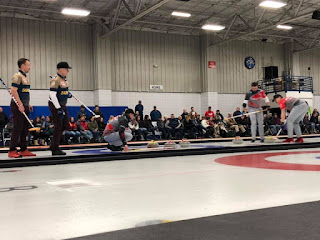 Another exciting week of curling has come and gone, and I had a ball! I really, really enjoyed all the live-streaming of the U.S. Curling National Championships during the week, which kept me in tune with what I was going to see in the finals.

I actually could have gone to the rounds on Wednesday because we had a snow day, but even though the weather was pretty good where I was, the weather was nasty in Kalamazoo. So I decided to just watch online instead. (Probably a good idea.)

The plan for Saturday was pretty perfect: go to Panera Bread and pick up a salad that I could store in the car until eating it in between matches, then go to Sweetwater's in Kalamazoo and pick up some of the best donuts you'll ever eat, watch the women's match, eat salad, watch the men's match, then eat some Chick-fil-a before heading home to relax. Luckily, the execution lived up to the planning!

On Tuesday, the Wings Event Center sent emails to those who had purchased curling tickets, notifying us that due to high demand, they were going to set up rows of chairs on the floor of the arena, which were just $25 for a reserved seat (or $13 addition to the general admission $12 ticket that we had).

I couldn't help myself; I wanted a different perspective! So I contacted the event center and upgraded my ticket. 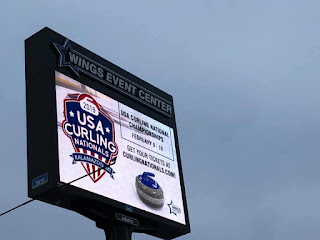 What resulted was a lovely day where I got to see the best U.S. curlers compete, win, lose, get medals and receive candy bowls. I also sang the national anthem a bunch (once before each match and also after both medal ceremonies), and heard lots and lots of bagpipes!

Fun fact about the national anthem: it was a recorded accompaniment all four times, and no one was really singing. So I did. The last time it was played, the lady next to me turned to me and said, "You have a lovely voice!" I told her thank you, and noticed she was wearing a U.S. Olympics jacket. Then she went and hugged Matt Hamilton! (I think that was his mom!)

Next week I don't have any national championships to attend! But so much has happened in the past month outside of figure skating and curling that I will try to catch up. In the meantime, enjoy my vlog of Saturday's competition. (If you missed the live stream, you can find archived matches HERE.)

And if you're interested, here are my PyeongChang blurbs from one year ago! Crazy!