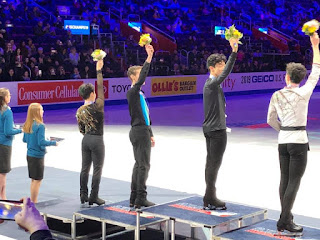 I'm still not over it.

It's been almost a week since I saw the men's free skate, and I'm still not over it.

My parents and I were there for five hours, but it did not feel sluggish at any time.

I'm still not over it.

The weather going back to Little Caesars Arena on Sunday afternoon was much different from the weather we had to deal with the night before. As we exited the arena on Saturday night, we were met with a slushy mush of snow, which I certainly wasn't expecting.

Thankfully, the flurries were done by noon, the roads were cleared, and we didn't have any problems. I had paid for parking again, and my mom in particular was thankful for the quick walk from the parking structure over to the arena.

We arrived just as the doors were opening, and wandered around the main concourse. Boy were we glad we didn't just go to our seats! 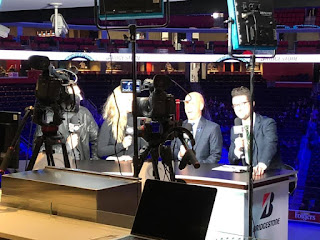 My mom and I split from my dad, and as we were walking to the restrooms, who comes past us but Madison Hubbell and Zack Donohue! I didn't recognize them, but my mom immediately spotted them. And they were about to go past my dad! We frantically tried to get his attention, but he wasn't paying attention.

However, as my dad and I waited for my mom, Scott Hamilton walked by! (Or, as my parents called him, "Scotty Hamilton!") All three of us were able to watch the three of them as they were recording a show for the U.S. Figure Skating YouTube channel. As a matter of fact, here it is (just imagine my parents and I right behind the cameras!):

I grabbed a Tollhouse Cookie Ice Cream Sandwich and settled in for the first round of skaters. There were twenty skaters total - four groups of five. There was a marked difference between the first fifteen and the final five. Those first 3/4 are capable of greatness, but none of them are quite there yet. Some highlights: 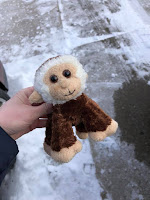 Alexei Krasnozhon skated to Edvard Grieg, but the most valuable part of his routine was his outfit, that cinched at the waist, leaving the bottom of the shirt to flare out like a helicopter whenever he skated. Vincent Zhou had the same thing, and I think this is the best style of outfit for male figure skaters to wear. (Yuzuru Hanyu wore that kind of outfit last season, for reference.)

I was going to throw out Brownie, my little stuffed monkey, for Jason Brown, but after watching Tomoki Hiwatashi's routine, I was compelled to throw him out a little earlier! He earned the first standing ovation of the afternoon with his routine based on "Fate of the Gods" by Steven Reineke. (He ended up with the pewter medal, which I didn't realize was a thing!) 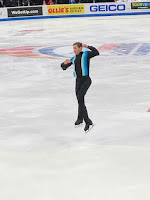 Third up was Jason Brown, who danced to Simon and Garfunkel, in a routine I wish wasn't Simon and Garfunkel. I don't think it's his style at all! He popped out of his attempted quad, but he didn't fall at all. You could tell he was pleased. I hope he feels like his coaching change is a benefit. (By the way, Brian Orser didn't show up in Detroit, though Brian Boitano did!)

Vincent Zhou actually hopped over Brown to take the silver. He had my favorite outfit of the entire day, with a black, grey, and red dragon over a white tunic (with a black belt cinched at the waist; this is already the most I've ever talked about fashion EVER!). I enjoyed his routine based on "Crouching Tiger, Hidden Dragon" and "Rising Sun." He was actually the last skater of the afternoon, which meant he had to follow up

Good grief, Nathan Chen. His performance was flawless. The only real flaw was that he was wearing his second choice of shirt. NBC showed his initial shirt, which was a skin-tight black shirt with orange squares and rectangles, that he was wearing in the morning skate. Instead, he wore a more loose fitting sweater, and as he was doing one of his final spins, his sweater was riding up! And as he changed to another position, he deftly grabbed the shirt and slid it back down. If you weren't looking closely, you wouldn't have even noticed that he pulled it down! 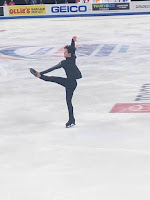 But I have never seen jumps so perfect. His axis was upright. He had plenty of time after the spins to position his feet for the landing. And he danced like no one was watching. (Though everybody was watching.) It didn't surprise me later to see that he had done gymnastics and ballet before he went full-on with figure skating.

It was a sharp contrast to his fun short program on "Caravan," but also fits his personality perfectly. Everyone was on the edge of their seats watching him skate, and every perfect jump was met with the loudest roar that I'd heard in the arena that weekend.

The loudest was definitely when his free skate score (228.80?!?!) was announced - even he was surprised! (To show how amazing that is, his free skate score by itself would have placed seventh in the overall men's competition this weekend.) While Zhou, Brown, and Chen easily distanced themselves from the rest of the pack, Chen by himself was sixty points ahead of Zhou. Javier Fernandez, who won the men's program at the European Championships the day before, would have placed fourth in the U.S. competition.

Now let's be fair - judges are different everywhere, and probably are the strictest in the European sector. We'll see how it all pans out in March in Japan, where Hanyu will hopefully be competing. I want to see a toe-to-toe showdown between Hanyu and Chen when both are at their best. They both have such different styles, and I don't know who would win!

I was blown away by this weekend's competitions. I wish I had thought to attend the women's skate on Friday night, because that would have been a sight to see. I had mentioned before about the crowds at LCA, and unfortunately that continued over the weekend. It shouldn't have been that way! These are such amazing skaters, and they deserve all the seats to be filled!

However, the crowd that did attend was great. Every skater got stuffed animals thrown at them. There was huge support for those that fell, and enthusiastic cheers for those that succeeded. This was a crowd that knew what was happening, and I especially got a kick out of all the kids that came to watch.

Was the price too steep? Isn't that always the case? I wish it was cheaper so that more people could take advantage of the amazing athleticism on display.

But enough of me talking. Here's my recap video from the afternoon!

Thanks for following my recap blogs! I am still riding high from last weekend. If you ever get a chance to see athletes compete in any capacity - especially if it's local to you - do it. You will not be disappointed!!