What happens when there are over 6,000 spoken languages in the world and you are hosting a wordwide event where everyone needs to understand what's going on?

Not only is the spoken language a struggle at international events, but the written language can make things difficult. Maps, signs, and directions are usually in the native language of the host city. And while they change their signs to be bilingual with the addition of English, that still doesn't cover everyone's language!

So how is a host city to solve the problem?

If you're Tokyo back in 1964, your answer was pictograms.

The more people started to travel for leisure, the more necessary it was to find a way for people with different languages to understand where things were in unfamiliar cities. The way for everyone to universally understand what was going on was to create a picture language. 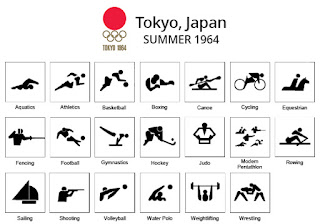 For the Olympics, spectators needed to understand where they needed to go to view the events they wanted to see. So pictures of the specific sports were posted on tickets, signs, buses, and venues in Tokyo, giving those outside of Japan a chance to know exactly where to go.

The pictograms were a huge success, and was repeated at every Olympics following 1964. At the turn of the millennium, pictogram design blew up, with the logo design helping to create the pictograms of the host city. Athens 2004 mimicked the black designs on ancient Greek pottery as their pictograms, and is one of my favorites. 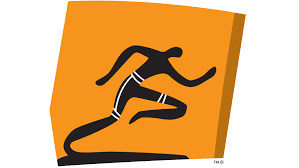 One thing has remained consistent over the years: motion. Unlike the universal signs for male and female (which we see mostly at restrooms), these pictograms all show flow and movement, representing each sport's kinetics and oscillation.

I bring up pictograms because earlier last week, Tokyo 2020 released their pictograms, using the indigo blue of the official logo along with elements of the checkered design (known as ichimatsu moyo in Japan). 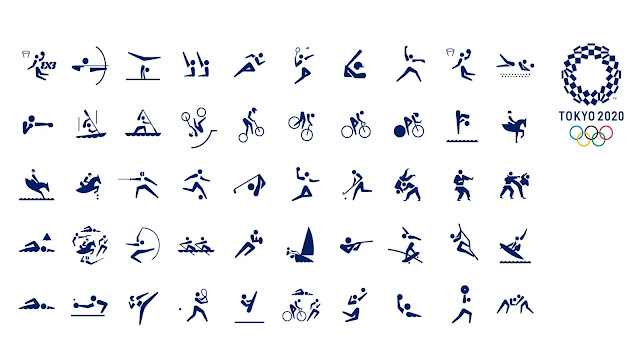 With the different varieties of one sport (like anything with a bicycle), pictograms become really important to show which discipline is actually being shown. There are five different bicycle disciplines, so there is a cyclist doing a flip to show BMX freestyle, a helmeted cyclist popping a wheelie to show BMX racing, a downhill cyclist showing mountain cycling, a cyclist on a straight road to show...well...road cycling, and finally a cyclist with different colored wheels and a unique helmet to show track cycling.

The smaller the world gets, the more necessary it is to be sensitive to all the people who are traveling the world. Thanks to pictograms, the Olympic Games are helping to make the movement much more universal.

For more information about different logos from past Olympics, you can check out this website, or look at this official Olympic Channel video, which will serve as our Olympic Channel Video of the Week!

There is now less than 500 days until the start of the Tokyo 2020 Olympics. Cue the panic.

A fun little follow-up to last week's blog post about my new career path: I applied to several Olympic positions this week. Two of them replied this week saying that I wasn't going to be a fit for the position, which was fine by me. While the experience would have been amazing, there are probably lots of more qualified people. The first position was serving as paralegal for LA 2028, and the second was serving as executive assistant to the USOC Chief. What cool positions! I would have been silly not to apply for them.