Showing posts from May, 2019
Show all

May 31, 2019
It has now been ten years since I first received my call as elementary school teacher. Back then, it seemed like I had my whole career ahead of me. I knew exactly how it would go: Teach in a school while doing a little bit of music stuff, Teach in a school and do a bunch of music in the church and school, Be the music person in a church and school full-time, Compose a bunch of stuff while being the music person in a church or school, Be published in a hymnal that will be sung by thousands of people for years to come, and Conduct a really, really good choir at the WELS Worship Conference before retiring. Spend the rest of my years RV-ing around the country. But God has other plans. I mean, God knows everything, so he knew my plans were futile. As a matter of fact, he probably laughed at my plans when I would think about them! God knows best. And after ten years of thinking I was on the right track, I realized I wasn’t. So how can that be? Didn’t I get a
Post a Comment
Read more

Last weekend the IAAF World Relays were held in Yokohama, Japan. This was a track-only event where different groups of athletes, from men to women and mixed, participated in many different disciplines. For those who watched, they had a ball watching "normal" relays, like the 4x100-meter and the 4x400-meter relays, as well as specialized events like the 2x2x400-meter (one man and one woman alternate running 400-meters twice ) and the 4x100-meter mixed shuttle hurdles. The World Relays aren't held every year, and it's a special treat for many. However, these relays are now bleeding into championship events, and not all of the athletes are pleased about it. However, the response from the fans that watched were pretty positive. At least, those who thought it was cool took to social media to talk about it: As I've often said for many years, I adore the aspect of men and women competing together. I understand completely that men and women
Post a Comment
Read more

How to Purchase Olympic Tickets (in the United States)

I watched seven hours  of track and field today. It was the IAAF World Relays. I was so ready to write about the track-only event that had over 40 countries and 700 athletes competing in a variety of relays. But I'm not writing about that today. Because I want to give you, the reader, some information that I wish that I had years ago: How to buy tickets to the Olympics! For years and years and years, I have watched Olympic games and wondered, "Why are the stands empty? If I knew how to get tickets I would be there in an instant!" But I never knew how it worked! So the seats remained empty and I remained at home. Until now. I have been knee-deep in Olympics coverage since February of 2018, and because I kept my ear to the ground, I heard about CoSport , the ticket reseller for the United States and a few other countries. (Cartan Global is the primary reseller for the rest of the world, while Japanese residents simply apply on the official Tokyo 2020 website.
Post a Comment
Read more 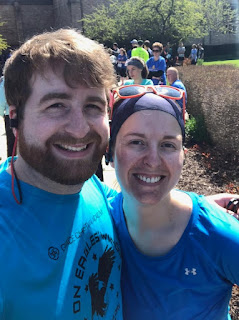 If you're not aware, when I do race recaps, I sprinkle my blog with the names of the songs I listened to as I ran the race. If that's something you like to see, then enjoy! This weekend marked the second time I ran the Seminary Scurry 5K, a race that takes place at our Lutheran Seminary in Mequon, Wisconsin. My brother is in his last year, so I wanted to take advantage of the fact that we'd be there together! "Elevate" by DJ Khalil A difference between this weekend and two years ago was the weather. In 2017 it was cloudy and chilly. This weekend was gorgeous . People were saying that it was probably the best weather the Scurry has ever had! (It helped that it was the first weekend in May instead of the last weekend in April.) There wasn't a cloud in the sky, the breeze was light, and it was in the 50s when we started running. "Poker Face" by Lady Gaga My niece was crawling back when I raced in 2017, but now she is almost three years old
Post a Comment
Read more
More posts