Showing posts from June, 2019
Show all

The results are in! On Monday and Tuesday thousands of people were overjoyed and millions of people were upset when the lottery results for Japan and the United States (and others) appeared. Some started immediately planning for Tokyo. Others started counting down to the next time they could attempt to purchase tickets. And others are getting ready to view rhythmic gymnastics...and that's it! What about me? And what's next? Let's dive in! Tokyo 2020 Prep This day was a major milestone in my planning. Once this day came and went, I could begin to think seriously about getting to Japan, making lodging reservations, telling my new bosses about this once-in-a-lifetime opportunity and the need for some vacation time, and more. The first reminder came from Ken Hanscom on Twitter: Following this tweet, I checked my email: The pressure was mounting. I logged onto my CoSport account. After the ticket request phase closed, they made sure we were all aware o
Post a Comment
Read more 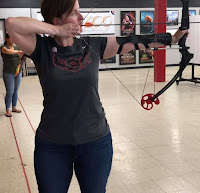 So I am 2-for-2 on my Olympic Day choices! Last year I spent Olympic Day kayaking on a river, and had a ball. (I still want to buy a kayak!) This year? It was a little harder to pick something. What sport do I pick? After some inner digging, I realized that the choice was staring me right in the face: Brady Ellison just won the world championship. Out of all the YouTube Olympic channels worth following, archery was the most fun to watch. I love all the characters that use bow and arrows. (Especially Legolas.) So I chose archery! The hardest part was finding a place that would accommodate my tight schedule. Many state parks offer archery classes, but at specific times of the week. There are sportsman's clubs that have both archery and gun ranges. But as much as I looked, I couldn't find anything that worked. Finally, I found a Yelp review from a girl who went with her husband to a place called Michiana Archery for a small lesson and had a blast. Turns out
1 comment
Read more

World Cups and the Olympic Link

The FIFA Women's World Cup and the Olympic Games have a very close relationship. Because of the sport's popularity in the world and the close proximity that the two have on the calendar, they are linked to each other. Even though football is very popular, the women's events in both the World Cup and  the Olympics are pretty young. The official Women's World Cup didn't begin until 1991 while women's football didn't get a place in the Olympics until Atlanta 1996. Since then, the popularity of women's football has increase, though unfortunately it will likely never reach the prominence of the men's sport. There are differences; while the World Cup offers a place for 24 nations, the Olympics can only have room for twelve due to the time constraints. The World Cup qualification is a three year ordeal, while the Olympics get their nations from confederations cups, except for Europe! They actually will get their qualifications for the Olympics if they
Post a Comment
Read more

Why Do You Run? 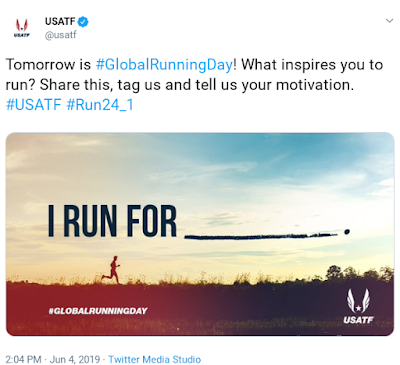 Wednesday was Global Running Day. Not "National" Running Day. Global  Running Day! The world celebrates running! To celebrate, the social media for USA Track and Field tweeted this out: It made me consider why people run. For Olympians and Olympian-caliber athletes, they run because they want to compete at a high level and win. That's easy. But why do others run? Those that aren't capable of running fast times are running for some reason, right? Let's even broaden the question even further to include more people: Why do we exercise ? In our history, there was never a copious need to run because people in the world were too busy trying to survive! They grew crops, worked in factories, and ran businesses while eating whatever they could afford. If they didn't make money, they didn't eat. If the crops didn't grow, they didn't eat. Treats and snacks were few and far between, because the need was just to get something in the stomach. Now
Post a Comment
Read more
More posts