Opening Ceremonies: How To Improve the Broadcast 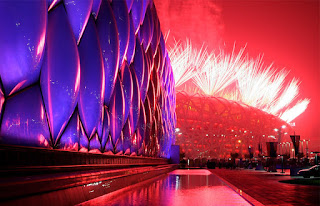 Today I'm going to start with the Olympic Channel Video of the Week, and it's for a good reason.

Last Thursday marked the 11th anniversary of the Beijing 2008 Olympic Opening Ceremony - a ceremony named by many professionals and fans as the greatest opening ceremony of all time.

To celebrate, the Olympic Channel YouTube page finally put the entire ceremony up. Watch it - all four hours! - below:

I took several sessions to watch the whole thing, and it was worth every minute. I didn't even fast-forward through the 204 countries and got to see government representatives stand and wave their flag in glee as their country marched into the stadium. I watched the energy level of most of the Chinese volunteers remain high through all two hours of athletes. And I got to hear how many times the Scottish bagpipes and Mexican mariachi music were played!

(I will admit: London 2012 had the best Opening Ceremony soundtrack of all time. I bought it on iTunes and still listen to it regularly!)

Most importantly, I witnessed segments that I had never been able to see before. Why? Well, that's an issue with American broadcasting. I have learned not to just put all the blame on NBC, because watching ESPN's coverage of the Pan American Games this week showed all the same problems. It's just dumb American broadcasting.

American broadcasting tries to reach the widest audience possible, and they feel that Americans have short attention spans, will get bored at things that are too slow, need every single little detail explained to them by familiar American celebrities and hosts, and must show as many American athletes as possible.

Every time an Olympics comes on, they have to address the same complaints from people like me. Why are there so many commercials? Why are segments cut out? Why can't we watch it live on our televisions? Why is there a need to have American announcers constantly talking through everything?!

I know I don't represent everyone, but I know that things have changed, and people are different than they were twenty years ago. American broadcasting tends to change like sloths, and their broadcasts of the Olympics (and other major international events) are no different. Plus, with a nation of immigrants, I'm sure people don't appreciate when their country or their cultural history is set aside so that we can watch the same Puffs commercial that we've already seen eight times that day.

In PyeongChang 2018, NBC streamed the Opening Ceremony  To my delight, they didn't use the NBC broadcast, but simply allowed us to watch the OBS feed. OBS stands for Olympic Broadcasting Services and delivers much of the video that the world watches for the Olympic and Paralympic Games. NBC usually takes that feed and then inserts its own camera angles so that we can watch more Americans. (Because we must watch only the American athletes of course!)

I adored watching the OBS feed of the Opening Ceremony because it was all there. No commercials. No commentary. We saw what everyone in the stadium saw. Unfortunately, when NBC aired the ceremony in primetime, it was very edited, and the OBS feed was not archived for people to watch until much later in the week.

I'm not saying that the OBS feed is perfect; it is just stadium audio, and visuals aren't explained. But the NBC feed certainly is not perfect. How can there be a healthy middle ground that will reach the most people and pacify most of them?

Here are my suggestions:

Did you ever watch VH1's Pop-Up Video back in the late 1990s and early 2000s? It was really the only way I used to watch music videos, because there would be small text boxes that would "pop up" and explain the artist, the video, or some relevant history.

I certainly think that having text boxes pop out of nowhere would be rather annoying. However, there would definitely be a place for text to appear at the bottom of the screen, explaining what was happening at the stadium. The text could explain the relevancy of a quote that was being spoken, a historical figure that appeared, or an event that is being signified.

Do we really need someone to speak over the beautiful music or audio, ruining the moment? Not unless we're watching on the radio or are blind. And even those with visual impairments probably get better, more detailed commentary than the stuff the morning talk show hosts dish out!

Give us stadium sound. Give us soundtracks that have been carefully curated for the past seven years. Don't give us Hoda Kotb. (Sorry, Hoda. It's not your fault. You're great everywhere else!)

Correct me if I'm wrong, but are the speeches given by the national IOC Chair and the President of the IOC subtitled at the stadium? Why can't that happen on television? I'm pretty sure that the speeches are written down and approved by the governing bodies before they are presented. Can't that text be shown on the screen? This is where the OBS struggles along with NBC. While NBC talks over the speech (and sometimes explains stuff before the speaker gets to it), the OBS doesn't do anything. To subtitle would be to reach everyone. Yes, the overall theme of the speeches doesn't change, but I would like to hear the poetic words that were chosen.

I have seen several methods channels have used to still show off sponsors but not leave the coverage. One is to separate into two screens. (This is nice for distance races.) The other is to have the brand name pop up at the bottom or top of the screen. The latter suggestion is just primed for problems. (An emotional, sad moment remembering a difficult time in this country's history...brought to you by Visa!), but I honestly am open to either version. It's better than what is going on now.

ABC and CBS have used their multiple channels to their advantage when covering the NCAA football and basketball national championships. Yes, they will have their "normal" coverage on the main channel, but they will utilize their other channels - or their streaming service - to show alternate angles, team-dominant feeds, or a specific camera angle.

Why can't NBC do that? It already has MSNBC and NBC Sports airing Olympic events. Why can't they also show an alternate view of the ceremony? Maybe MSNBC has special coverage of the athlete's march, with commentary by one of their professional international commentators. Or NBC Sports can be the strict OBS feed. Something like that.

Gimme everything. NO EDITING.

Creators of these opening ceremonies, from China's Zhang Yimou to Great Britain's Danny Boyle, spend literal years making these events. They direct everything from visuals to audio to effects. The flow of the ceremony depends on every section. Why, then, do we feel the need to cut out "slower" moments?

Yes, the Twitter generation loves to skewer weird moments. Why is Voldemort fighting thirty Mary Poppins? Could any more Canadian stereotypes fit on that stadium floor? Was Gisele Bündchen walking two hundred meters the only thing that was supposed to happen during this song? Did those doves all die when the cauldron was lit? (FYI, yes. Yes they did.)

You know what? Let them! That is not NBC's problem. Heck, that isn't even the host country's problem. That's a Twitter problem. These host countries are doing their best to show off their culture and history to the world, and ignorant people decide that because it's too weird for them, that it's dumb. It's not dumb. The more we show them the world, the easier it will be for them to accept it - and others who represent that history and culture.

These are just a few ideas that I have. (And yes, I know I didn't bring about world peace. It's called satire.) But do you have any suggestions? Post about it on Twitter or Facebook, or comment below!

The reason I post this Opening Ceremony in August of 2019 is because the more everyone can speak up about it now, the more broadcasters will see what viewers want and make changes when the next Opening Ceremony comes around in Tokyo. Who knows what will happen!

'm Claire Nat and you're reading Light The Cauldron! Follow me on Twitter and Facebook @CauldronLight and read my past Olympic articles! Look back on previous posts to hear about my trips to the US Curling National Championships, the US Figure Skating Championships, and my very successful quest to acquire tickets for the Tokyo 2020 Olympics!