Tier 3 of the Tokyo 2020 planning has been achieved!

I was going to wait until 2020 to purchase flights to and from Tokyo for the Olympics, but my eagerness got the best of me. Well, that and the fact that I found tickets for a good price and without a long layover anywhere.

If you haven't used Google Flights, I highly recommend you use it. Better yet, use Google Flights on Chrome while in incognito mode. I have found that this method give me flights and dates that I might not find while in another browser or on a different website.

The biggest thing about purchasing flights like this is making sure you spend a lot of time researching different ways. I tried a lot of airports and a lot of different days before finally settling on my purchases. After I noticed that a lot of the flights had to go to Los Angeles, I was looking at separate flights to LA. I attempted flying in and out of different international airports in Japan. Heck, I even tried to see if flying to Hawaii and then to Tokyo was cheaper.

A few items kept getting in the way. The first was layovers. If I found cheaper routes, it usually meant that the layover was going to be really long, or there were multiple stops. Some flights took off and landed two days later - even with the time change, that's a long time!

The final decision was landing in Tokyo on the same day as the Opening Ceremony. This would be a terrible idea if I were actually attending the ceremony, but I'm not. So instead, I booked two nights at a hotel that is near the Narita airport and provides shuttle service. This gives me a great opportunity to chill out at a hotel, drop off my bags, evaluate my body clock, and then determine if I wanted to either head into Tokyo for a  public viewing party (which I'm hoping to do) or simply watch the ceremony at the hotel!

These decisions greatly determined what I would do when CoSport quietly dropped some more event tickets on their website. There were some options I could have done, but I had to take into account the close timing of the events with my landing in Japan. What I would like to do is enjoy more of the touristy things of Japan the first couple of days, and then get deep into actual Olympics items as the days progress. We'll see how I'm feeling.

However, I did purchase one event because 1) the timing was right, 2) it was an event I really wanted to see live, and 3) it is making its Olympic debut! That event is 3x3 basketball. With the session that I purchased, I actually get to watch four games: two preliminary women's games, and two preliminary men's games. So I'm getting some bang for my buck!

(Fun fact: as I was looking through CoSport last week, this was being advertised. Kind of funny it's still on there, considering the marathon isn't even being held in Tokyo or even on August 9 anymore...) 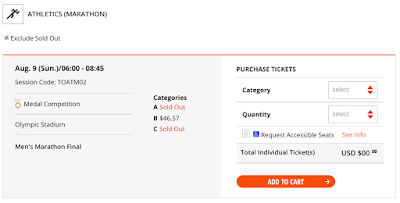 I have noticed (with great glee) that CoSport has wisely made it so that members who are purchasing tickets don't have to pay a shipping fee for each transaction that they have. Instead, they have been lumping all the tickets under one (future) shipment and providing one shipping fee. This started back in October when I got an email saying that CoSport was actually refunding me some money. Turns out this was the cost that they'd charged me for shipping of my second and third transactions. And if they wanted me to take that refund and use it to buy more tickets, well, they got their wish!

I am very excited that my flights have been purchased. Tier 3 is accomplished. And now I have a new goal for Tier 4: pay off all of my Tokyo purchases that I made in 2019 before I take off in July of 2020! It is a formidable challenge, but it would make life so much easier if it was all paid off. Then I can just sit back and enjoy my travels instead of worrying about my piling debt!

It does mean my plans before Tokyo are pretty light. I hopefully will be able to hold off on large purchases until I've paid stuff off. Buy new Christmas decorations? Nope - just live with what I've got. Fly out to visit family? Nope - they're coming out this way, so I'll just be okay with that! Going out to eat? Not as much as before. (Sorry, Chick-fil-a.)

Time to pay it up!

...No. But it will be in less than nine months!