Too Much Talk, Not Enough Walk

But as I've grown up, I've realized something: people talk too much.

However, it just becomes too much talking. It just becomes noise, and no one listens to each other because they're too busy talking!

People feel like if they talk enough, action will be taken. But action only gets taken if people act.

This is an Olympics blog, so there is definitely relevance here.

For years, professional swimmers have complained about how FINA (the governing body of international swimming) works. They know that they need to be paid more in order to continue rigorous training for World Championships and Olympics. But they have to look for sponsors, enter low-key meets, and maybe even have a part-time job.

So finally, someone acted. Konstantin Grigorishin of the Ukraine decided to put his money into action and founded the International Swimming League, creating a professional league that treated swimmers like professionals, similar to athletes in football, football (the other one), basketball, and more. FINA wasn't happy about it and refuses to recognize any records made in the ISL. But you know what? Changes will come because someone acted.

There can also be actions that are reacting to something bad. For years, figure skating had issues with its judging system. People talked about it, but nothing was really done. Not until Salt Lake City 2002 when there was blatant judging issues in the pairs' figure skating program meant that changes had to be made. That's how the current format came to be.

Everyone in the world believes that spreading the message will create some sort of action. But it's only part of it. Yes, the communication is important, but someone has to take the communication and do something.

We're in the middle of something like that with the IAAF Diamond League for athletics. For years (sensing a pattern?) athletes have complained about how the Diamond League works. There has been lots of talk. I follow many track and field athletes on Twitter, and it is always a source of athlete venting.

This week, the Diamond League decided that it was going to condense the format of its already-condensed format of two hour coverage. Instead, it would be a 90-minute format to help appease markets airing it and hopefully attract more viewers. With that, the Diamond League had to cut some sports from the main competition. And those cuts included some of my favorites:
I was absolutely shocked by this news - and so is everyone else. Almost all of the talk has been very negative - they hate this news. Some - like sprinting legend Michael Johnson - supported the changes.

He has a point when it comes to people finally acting (and might have helped me formulate what I was going to talk about this week).

But in my personal opinion - and to add more noise to the talking machine - I disagree with the decision to cut four events and make the TV viewing 90 minutes. I am someone who doesn't even watch television anymore - I watch everything online. My NBC Sports Gold pass allows me to watch each Diamond League event from start to finish without needing to cut into other events. I can watch the entire shot put event instead of the terrible TV coverage that might just cover one or two throws. (Poor Dwight Stones. How does he feel giving his 2-minute coverage of a majority of the events in a competition so that sprinting can get more time?)

The Diamond League has decided to continue marketing to television audiences instead of where they really should be marketing: online streaming. If they were to push a streaming platform, they could include so many more events, implement split-screens, and give exposure to so many more viewers.


On the American side of things, NBC should really work more with its Olympic Channel to create shortened content of singular events in the track and field world. You know how the NFL Network re-airs football games but only shows the actual plays, meaning that the coverage doesn't last much beyond 60 minutes? So much fluff is cut out, and the actual act of playing football is shown. Why can't the Olympic Channel have 30-minute shows that cover different events? A 30-minute version of hammer throw would be awesome! Still have commentators, but show every single throw and cut out the fluff and waiting time. And it doesn't even have to be restricted to just athletics. Gymnastics could also benefit from this kind of setup.

My suggestions at this point are merely throwing more noise into the air. Yup - another person is complaining about the new Diamond League decisions. But Christian Taylor - a triple jumper who just saw his event cut out of the Diamond League (which is a huge shame because his rivalry with Will Claye made for some of the best competitions this past season) - decided to take action.

Back in July The Athletics Association started a Twitter feed, but it wasn't until this past Thursday that Taylor really made his mark. Now over 2000 people follow the page, which promises to take action for all athletes in track and field. 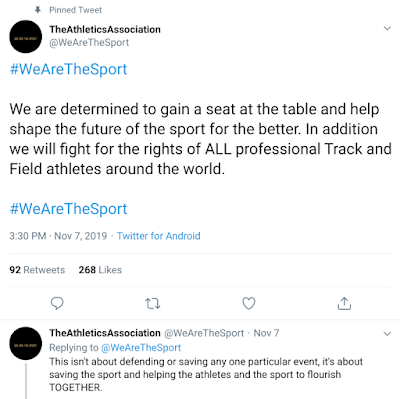 Because this movement is in its infancy, I am curious where it will go. Will this simply be more noise flown into the air? Or will it actually confront the IAAF and its decisions and demand better?

I really hope that Taylor is able to motivate changes that benefit the athletes and the viewers and gives more exposure to the sport. When it comes to sport, track and field was the first - everything else just stemmed off of running, jumping, and throwing. So it's time to relish the OG and get everyone excited about the sport.

What do you think? How can action be taken? How can we as viewers and fans take action instead of just throwing more noise into the air? Let's work to not just talk the talk, but walk the walk. Because only then will the right action be taken.

...No. But it will be in less than eleven months!