A Lesson in Fandom

It is pretty amazing how this story works.

It's as if I was living in an episode of Full House. In the end of this blog, feel free to cue the cheesy synth string music!

A few weeks ago I went back to my parents' home for the weekend. The big news was that Notre Dame's sellout streak of home football games was snapped with the Navy game. The streak started in 1973 and lasted for 273 games.

(With all this talk of Notre Dame lately, you'd think I'd turned into a fan of the Fighting Irish. I am not. It's just a proximity thing! Keep reading for your dose of Michigan Wolverine goodness.)

But since I was home and that was the news on the radio (which my dad still listens to), it was worth talking about with him!

We both agreed that with Notre Dame's subpar season and the uninteresting visiting teams, it was only natural that the games not sell out. When people have large flatscreen televisions and computer screens at home, why bother going to the stadium? In homes, people don't have to park their cars in weird places and pay a lot of money. In homes, people have a dedicated seat - likely very comfortable. In homes, people are warm - and if they're not, they can turn up the thermostat or add another log on the fire or grab another six blankets that are in the closet.

The next day, my parents and I sat in comfy couches and watched the Michigan-Michigan State game in crystal clear HD without paying extra for parking or food! We all agreed it was better than going to the game.

So this was my mindset going into the final football games of the season. Why would people bother attending games if the home experience is so much better?

Then, a few days later, I got a free pair of Notre Dame football tickets dropped into my lap. While it gave me good preparation for my future Tokyo travels by letting me experience a new area and a new sporting location, it also made me realize why people enjoy attending sporting events - even if it's cold and windy.

At the game, I experienced fans of the same team talking and high-fiving each other...but these fans didn't know each other, hadn't seen each other before, and likely won't ever see each other again. It was just the sharing of a common experience that brought them together.

I emphasized that sentence because of what came next: Michigan-Ohio State.

With it being Thanksgiving, I was back with my parents (and sister!) and we ended our wonderful weekend of family time on a terrible note. Yeah, Michigan lost. Badly. Again. And we all felt miserable about it. (Well, maybe not my sister. She's not a gigantic football fan.)

But as I drove back to my home, I couldn't stop thinking about fandom. Why do people torture themselves with sports? Sports just make everyone miserable. Losing is not a fun feeling; why should we bother making ourselves suffer through it? It wasn't a great drive.

The misery continued for a few days. Even when I returned back to my parents' house (Yes - I was back there a lot in the past month!) on Sunday evening, my dad was still very quiet. It only made me more irritated at fandom. How dare being a fan of something make people I love feel awful just by the team losing and doing badly!

Monday morning came, and my dad and I went to the M Club of Ann Arbor luncheon. A member of his church (and huge Michigan fan) gifted the club membership to my parents for the year, and I always know when it's Monday because my dad will send a picture from the luncheon!

This was the only Monday this fall where I was able to go along, and I'm so glad I did. I mean, the lunch wasn't anything to write home about, but the environment was. (I'm literally writing about it right now.)

We were in one of the large rooms at Weber's restaurant in Ann Arbor, and every circular table is filled with people (mostly older than 60 years) all decked out in their maize and blue. Just a reminder: Michigan lost the football game a mere two days ago to their most hated rivals, but these people still wore their hats, sweaters, polos, scarves, earrings, necklaces, and jackets with the M logo on them.

To them, fandom doesn't mean putting the team apparel away in embarrassment or anger after a loss.

My dad brought me along as a guest, and there were three other guests present at the luncheon. How did I know? We got introduced and everyone clapped for us!

To them, fandom means welcoming fellow supporters of their favorite team (or at least welcome someone with a hope that they'll convert to support the favorite team).

There were so many tables because it's the football season, and remarkably almost all the tables were full!

To them, fandom doesn't take a break even when something ruins the mood.

The biggest thing that I noticed, and made me really change my mood about fandom, was how everyone talked to each other. Since it was evident that we were all Michigan fans, we could talk openly with each other about our frustration with the team's performance, our disgust at the amount of red that was in Michigan Stadium (there was a lot of talk about that), and our hope for...the basketball team.

My father's mood after the luncheon was remarkably brighter, even though Michigan had still lost the game on Saturday. The word of the day was "cathartic." Everyone was able to vent and feel a ton better.

I also enjoyed that the M Club brings in coaches and assistants from the various Michigan sports teams to talk about their seasons. Of course, we had an assistant football coach who had to try to explain to these people how the loss occurred. But we also had the head coach of the women's gymnastics team, who was able to highlight each member of the squad and invite everyone to come and see the team compete at a free scrimmage on Saturday.

The lesson I learned from this timeline of events is important. Yes, it's great to sit in the comfort of our homes and watch games on the flatscreen. But - just like the dangers of smartphones and social media - we still are generally isolated. But going to an event and experiencing crowds of people who support the same thing you do - whether it's sports, movies, conventions, etc. - makes the experience so much sweeter.

I guess that makes attending an Olympics really cool, right? There are a few things that most people have just resigned themselves to never see in person. But I'm about to experience an event that isn't just important to people in this country, but important to people all over the world. It is going to be an experience in fandom on a whole new level!

It's quite a lesson!

***Funnily enough, the same week I write an article about fandom, I am alerted to a comic that applies directly to it! (If you haven't checked out Nathan Pyle's Strange Planet, you really, really should.)*** 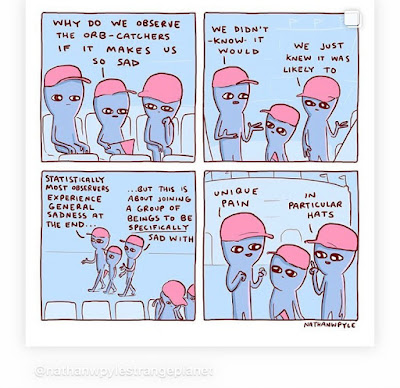 ...No. But it will be in less than eight months!