December 01, 2019
With a little more relaxed Thanksgiving schedule this year, I decided that I could once again participate in a Turkey Trot. Three years ago I went over to Niles with my brother because that was the one that was most widely publicized. After I'd registered, I found that Benton Harbor also had a Turkey Trot, which would have been a little closer to travel to!

So this time around, I registered for the Benton Harbor Turkey Trot, especially since I found out where the proceeds of the race would go. According to the website, "Proceeds benefit the Benton Harbor Police Athletic League (PAL), with a mission to promote community relations and cooperation between the youth of our communities, their families, the Benton Harbor Department of Public Safety, and other law enforcement agencies." 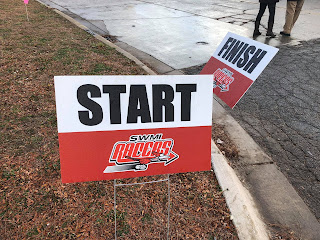 The entire event is mainly put on by the SWMI RACERS group, which is the running group in our area. They actually offered early early packet pickup, which worked much better for my schedule this past week, and I was able to get my stuff on Monday evening.

The shirt is a much more comfortable fabric that the standard 100% cotton that most races offer - plus it's not white!

On the emails leading up to the race, I noticed that parking didn't seem to be an issue. The mentioned not to park on the race route, but that "many vacant lots are available for parking." I figured that meant I could park as close as I wanted.

However, I almost missed the race! It seems like the time of the race is either the most prominent thing that's easy to just glaze over, or it's not easy to find at all. In a previous email I thought that the race started at 10:15, but the night before I took one more look. I'm glad I did - it was actually at 9:00!

I left home at 8:00 and made it to downtown Benton Harbor in no time, and there wasn't any issues with traffic. Actually, I was able to park right next to the finish line! 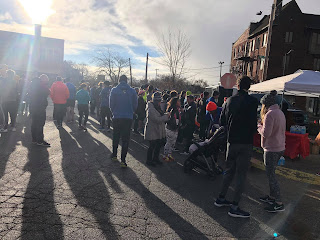 The weather was brisk, but not freezing. I mean, it was freezing for those of us that were only wearing our running gear. I once heard that when running, you pretend that the weather is 20 degrees warmer. So if you're not actually running, it's chilly! They had the Benton Harbor Public Library open for raceday registration, so I hung out in there until there were about ten minutes left.

I thought that doing a race in Benton Harbor would mean I could run in anonymity, but it turned out that I saw five people from my church and school! So much for that.

The problem was that the race coordinator didn't say that everyone had to start in the teeny tiny gate! So those who were smart made sure to position themselves in front of it, but those who were just goofing off (and starting with a Naruto run) ended up bolting away while the coordinator tried to frantically get them to come back and start properly. I wasn't keen on starting in the front of the pack, so I didn't have any issues. 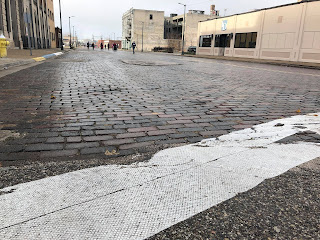 The area where I did have issues was the first quarter of the race, which was on brick! I didn't realize this until I got to the street where the brick started. And it's not updated brick, either; there was potholes and chipped bricks in many places. Plus we had extreme winds and rain on Wednesday, so the bricks also felt kind of slick. I didn't want to wipe out in the first part of the race. And there wasn't any chance of me going out on the sidewalk because those were just as damaged and uneven.

The course was an out-and-back, which I do not like. I much prefer a looped course. (This coming Saturday's race is a loop course; more on that next week!) But I get the reason for an out-and-back course: fewer road closures, fewer volunteers because they could handle two parts of the course, and only one place for water!

Speaking of the water stops, I remembered at May's Seminary Scurry that I slogged through that race, and I felt the water stops hurt my run. So this time I avoided the water stops. If it was any longer than a 5K, I would have made a point to drink water, but it wasn't a huge need today.

I felt like I had a solid race. It wasn't any faster than my usual 5K runs, but it wasn't any slower. My best gauge on the race is how many people pass me in the last half of the race, and there were very few, and I also didn't pass a lot of people in the last half. It meant I had set out at a good pace and was right where I needed to be.

Much of the race was on the road that runs parallel to the St. Joseph River and the Benton Harbor Boat Launch, which meant that the winds that were whipping in had nothing to block it from coming in our faces whenever we faced north. It's a good thing that the gale-force winds were the day before, because the waves of the river had actually submerged the course before clearing on Thanksgiving morning.

If the course was out-and-back, that meant I had to deal with those wretched bricks in the road again as I went back to the finish line. I never want to run on bricks in a race again! I hope that in future years, they avoid using the downtown Benton Harbor brick road. 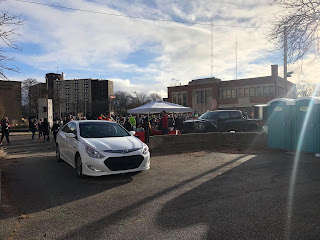 The race coordinator said that the first 500 runners would get a participation medal, which meant that I would get one. They could tell who it was because they had a personalized Turkey Trot bib. Combine those 500 runners with the plain white bibs of the racers registering that day (and there were a lot of them!), I'm guessing there were about 700 runners total. Definitely not as many as the Niles Turkey Trot (which I'm pretty sure has runners in the thousands), but I actually liked the size of Benton Harbor's pool.

Including the medal, I also got a bottle of water, a granola bar, and an apple. (Surprisingly, no bananas!) They also had liters of apple cider for the top finishers, but had a few left over, so I was able to snag one of those, too.

The race overall was a very pleasant way to start Thanksgiving, and meant I didn't regret any of the delicious food I ate later in the day! I'm looking forward to doing it again soon.

On Friday my dad and I watched the HBO Sports documentary Lindsey Vonn: The Final Season, and it was a nice retrospective on not only Vonn's final season (which was much shorter than she wanted it to be), but her whole career as a skier. I never saw Vonn beyond the model shots and Olympic runs, so it was great to see her struggling with injuries and personal issues and also be very frank about them.

It also made me excited to go skiing again. Did I tell you that I got my skis waxed a month ago? I can't wait to use them again - it's been four years!

...No. But it will be in less than eight months!