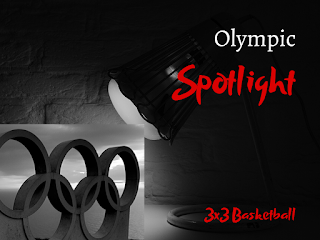 In my "Spotlight" series during 2020, I will be taking a look at sports that I will be watching LIVE and IN PERSON when I travel to Tokyo for the Olympics!

I have to admit that a lot of this series is meant for my benefit! While I am well versed in the wide world of athletics (track and field), many other Olympic sports' rules and athletes are pretty unfamiliar. So as I research, I can take that information with me as I sit in the stands.

This week, we are taking look at 3x3 basketball.

Many of you might be confused as to exactly why 3x3 basketball is an Olympic sport. Keep in mind that there are approximately eight billion different swimming events in a single Olympics (give or take), so why not pbarovide another opportunity to enjoy some basketball?

This is the first year that it will be played at the Olympic Games, though it has made a presence in the Youth Olympic Games since 2010 and has grown in popularity all over the globe.

We'll be covering FIBA 5x5 basketball in a later post - and yes, there are differences to what Americans are familiar with - but 3x3 basketball can be defined by one word: quick.

Find the full, detailed, wordy rules here. Otherwise, read on for the concise version by me!

Forget about taking the ball from one half court to another. Instead, everything is played on one half court, about 15x11 meters. How do players know who has the ball? Well, if you have ever played half court ball in a gym or even in the driveway, it's the same way: the changeover takes place when the defense takes the ball behind the arc.

While the official title is "3x3 basketball," each team actually has four players: three on the court and one substitute. Those subs don't need to check in at the table and wait for refs to allow them in. They just need to wait for a deadball and wait for the active player to step off the court and make physical contact with the sub.

Most of us are used to four quarters or two halves of basketball. In 3x3, there is one ten-minute session, or the first team to 21 points. And that's it! No halftime, and just one 30-second timeout per team. The shot clock is a mere 12 seconds. No time to think!

If you hate the nonstop music that the NBA provides during their games (like my parents), you probably won't like 3x3 basketball, because music usually plays through the entire game.

There are fouls, but no player is fouled out. (Honestly - you only play for ten minutes!) A bonus two free throws are offered after a team commits six fouls, and if they reach more than nine fouls, it turns into a technical foul: two free throws and ball possession. (Which, if you consider how the game is played, can result in a lot of points in a small amount of time.)

There is no opening tip; instead, the first possession is determined by a coin toss. Then the ball is given to the defender to check it to the offense.

Qualifying teams need to play together on a consistent basis, so don't assume that NBA and WNBA stars are going to be teaming up just for two weeks of play. I don't think they'd do well anyway; the game is so fast-paced that the best teams will be the ones that have played together for many years.

In reality, it's the smaller countries like Angola and Latvia who have some of the top ranked teams in points. It might be hard for them to field a full regulation team and court, but much easier to get four talented players together and set up a 15x11 meter court. I even saw a picture of a game taking place in a shopping mall!

Before I get to some players to watch, I have to mention that 3x3 basketball borrows its player names from the XFL: each player has a nickname!

The top male player in the world is from Serbia: Dušan Bulut. (Nickname: Mr. Bulutproof.) He plays 3x3 basketball year-round, representing his home country in international events and professionally in the United Arab Emirates.

He caused quite a stir when he was drafted by a 3x3 tournament in the States called the BIG3 last year. This is a non-FIBA-sanctioned tournament, and FIBA threatened to declare Bulut ineligible for the Olympics if he played. (So he didn't.)

On the women's side, the top women's players are a pair of twins from Russia - Olga and Evgeniia Frolkina. But seeing as the Russians might not be attending the Olympics at all, the gaze turns toward China, the winner of the 2019 FIBA World Cup, and ZhiTing Zhang. She made a name for herself in national tournaments before coming on to international play.

My Schedule in Tokyo

I have tickets for one session of 3x3 basketball. I was initially excited to see that I was going to watch four matches - two men's games and two women's games!

However, now that I am more familiar with the rules, I see that the session probably won't last longer than two hours. However, I'm looking forward to being able to watch eight different teams show their quick skills as they march toward Olympic gold.

I'm posting here the full men's 2016 FIBA World Championship match between Serbia and the United States. You might think that is a huge amount of time, but remember that speed is the name of the game. The video is just 18 minutes long! You've got that amount of time, right?

...No. But it will be in less than seven months!