A History of Lighting the Cauldron: Part 2 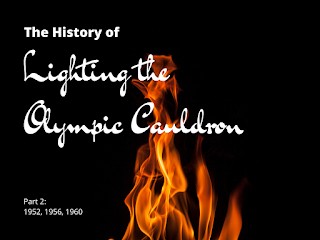 These are the three Olympics we'll be covering today in our monthly "Light the Cauldron" series.

Helsinki 1952: The Cauldron Gets Some Style

While the cauldron in 1948 was pretty similar to Berlin's cauldron of twelve years earlier, Helsinki 1952 brought class to the cauldron that was at field level. There was a bowl on five thin legs that was lit by Paavo Nurmi. Nurmi won numerous gold medals in the 1920s in distance running for Finland and lit the lower cauldron. Then he passed it on to four Finnish soccer players that relayed it to the top of the Helsinki stadium, where the larger cauldron was lit by Hannes Kolehmainen, another multi-gold-medalist.

This was the first Olympics where the flame was carried via airplane and horseback. To avoid taking the flame through the Soviet Union (which was still not a prominent Olympic force for another few years), it was flown to Copenhagen and then actually moved north to the Arctic Circle before going south to Helsinki!

Melbourne, Australia was the host of the 1956 Summer Olympics, but due to an animal quarantine that the country held, horses couldn't be brought into the country for the equestrian events.

As a result, Stockholm, Sweden ended up hosting just the equestrian events. And it even had its own torch relay and cauldron lighting! The relay flew from Athens to Copenhagen, Denmark, where a horseback relay was staged to Stockholm. The first cauldron was lit by Hans Wikne on horseback at field level, while Karin Lindberg and Henry Eriksson both lit two upper cauldrons after running the shape of a horseshoe around the stadium. (They really got into the whole "equestrian only" kick.)

Meanwhile, the main torch relay needed to get to Australia from Greece, but at the time flights couldn't go all that distance. So the flame made stops in Istanbul, Basra, Karachi, Calcutta, Bangkok, Singapore, Jakarta, and Darwin.

In Melbourne, Ron Clarke took the field to light the cauldron high above Melbourne's stadium. But the flame wasn't just a flame; sparks continually flew from the torch as Clarke ran around. After he lit the cauldron and was congratulated with a medallion, people noticed that his white shirt was full of little holes and he had small burns on his right arm!

After the insane world travel the flame took in 1956, the journey from Olympia to Rome was a piece of cake. As a result, the path decided to take a scenic route to many of the ancient cities, including Sicily, Taranto, and Naples. It was the longest time that the torch had spent in Greece, allowing the Olympics to honor both ancient civilizations of Greece and Rome. Eventually, it went along the Appian Way before passing many of Rome's most famous sites on its way to the stadium. It didn't stay on land, but did move by boat to cross the Ionian Sea.

Finally, the torch made its way to the stadium, where Giancarlo Peris lit the cauldron. He wasn't a gold medalist, like most cauldron lighters had been. However, he was an Italian with Greek descendants, and it fit the organizers' plan perfectly.


At this time, the lighting of the cauldron was a simple affair; it was the torch relay route that brought on the most significance. But as more and more relays and lightings took place, host organizers needed to think up more clever and unique ways to display this now-revered tradition!