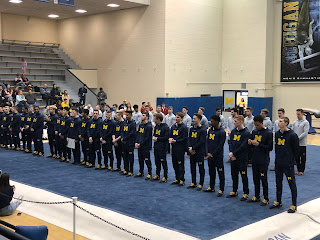 I sit, once again, watching the US Track and Field Indoor Championships, wishing I could be there to cheer them on.

It seems to me like all the competitions I'd like to attend are either 1) too far away, 2) too expensive, or 3) sold out. It is a big bummer.

Last year, I was lucky enough to go to two national championships in Michigan. This year, I don't seem to be as lucky finding competitions near me. 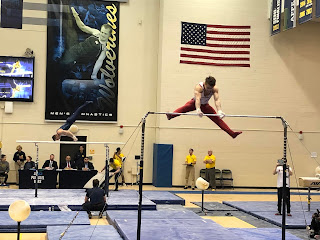 This weekend, two top-tier men's collegiate gymnastics teams competed in Ann Arbor, and I was fortunate enough to be in the area. While it's not a major event in Olympic sports, this is the next best thing.

The event was free, which meant that both my parents also came along with me. Sometimes the gymnastics competitions are in the Crisler Center, but since the men's basketball team has a game tomorrow, they used their primary facility that has far fewer seats - Cliff Keen Arena. 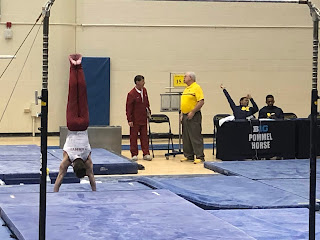 The University of Michigan was playing Oklahoma University - the #3 team in the country playing the #2. If you follow men's college gymnastics, you know that Oklahoma has been a gymnastics powerhouse for many years. Yul Moldauer and Allan Bower, favorites to make the Olympic team this year, are products of Oklahoma, and the men's national coach from Rio 2016, Mark Williams, is the head coach.

Michigan won the national championship in 2014 when Olympian Sam Mikulak was competing there. It took a dip, but has rebounded recently.

There is no chance I'm going to be able to afford Tokyo gymnastics events, but Cliff Keen Arena allowed me and my parents to see emerging gymnastics stars up close! It's not Olympic caliber - at least, not yet - but those athletes are building up their repertoires with the best of the best. 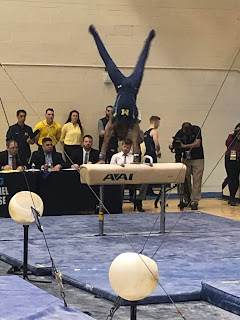 The setup is different from world gymnastics competitions. In this dual meet, the teams have six athletes that compete on an apparatus - the top five scores count. Then the teams switch the apparatuses. For men, they do this three times to cover the six apparatuses. While the team can enter specialists, there is an all-around competition where athletes from the teams would compete in all six apparatuses, and their total scores result in the winners. There's not an individual competition for those.

Michigan ended up taking the meet thanks to two of their top gymnasts - junior Camden Bock and freshman Paul Juda.  Michigan took five of the seven events - six apparatus and the individual all-around. Juda was especially impressive, and he really doesn't look like a freshman!

Some of the top Oklahoma gymnasts include Vitaliy Guimares and Matt Wenske, who got third in the all-around behind Juda and Bock. Guimares won two individual events - the floor exercise and vault - and looked pretty amazing doing so. 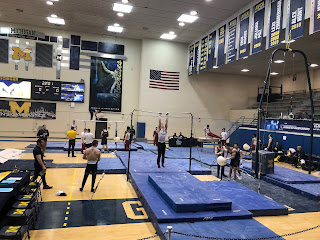 Bock and Juda from Michigan, as well as Alexei Vernyi, Jack Freeman, Gage Dyer, and Wenske for Oklahoma, are all competing in the USA Gymnastics' Winter Cup Challenge next weekend in Las Vegas. Freeman either got injured or aggravated an injury while warming up for the still rings, so I'm not sure if he'll still compete. Not only are collegiate athletes competing, but also pros like Mikulak and Moldauer.

I'm looking forward to seeing the US Olympic Trials in the summer and seeing if any Oklahoma or Michigan gymnasts will vie for a spot on the team. While they may not make it this year, men's college gymnastics can result in spots for the national team for many years to come!