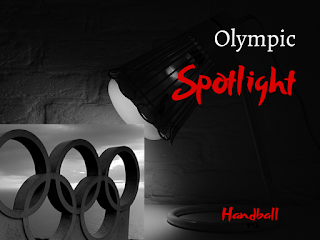 I really enjoyed presenting my Olympics plans to my students this week! I would have been happy to show you pictures of the fun...but no one took them. Ah, well.

In the presentation, I showed students the events I was going to see. Many of them piqued their interest, but a couple of them resulted in confused looks. One was 3x3 basketball, which they didn't realize even existed as a real sport. And the second was handball!

This was the picture I showed in my presentation: 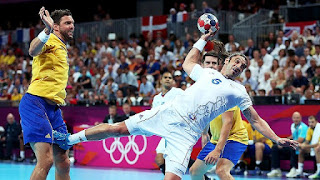 It doesn't show very much, but this is a sport I definitely know the kids were not familiar with! What's the point? How many players? What does the court look like? What is he throwing the ball at?

Basically, handball is a mix of soccer (football) and basketball. The court is larger than a basketball court, but has the same layout with a center line and arcs on either side. However, the goals are similar to soccer goals, but smaller. Like hockey, players can come on and off the court without going to an official.

There are seven players on the court for each team - including the goalie. The goalie is the only player that can be inside the 6 meter arc; the other players are playing offense and defense. Players can take three steps with the ball in their hand, but if they want to take more, they need to dribble the ball. They also can't hold the ball and stay put for three seconds.

Like basketball, there are free throws when fouls are committed. Like soccer, there are corner [throws] when the ball goes out of bounce around the goal.

There are two halves of 30 minutes, and the team that scores the most wins!

Oh, unlike football, you can't touch the ball with any part of your body below the knee, except for the goalie, who can kick the ball away when it's shot on goal.

Handball had its origins in Denmark, and the sport is the most popular in northern Europe. Last year Germany and Denmark hosted it, and games were full of crazed fans.

While other countries outside of Europe field teams, they haven't been able to break through with fans. For the United States, the teams find it hard to qualify, so it's hard to grow the fanbase.

So how do we promote this sport in places like the United States?

Several steps (which can also be used in other "unknown" events in countries all over the world):


My Schedule in Tokyo

I'm excited to experience the arena by Yoyogi Park for one match. While some preliminary rounds are starting to set their schedules (like indoor volleyball), handball schedules still haven't been finalized, so I don't know which teams I'm going to see.

Regardless of who I see, I know that I'm going to be around some pretty rabid fans - especially if one of the teams is from northern Europe!

If you want a short, concise summary of handball, you can watch this.

Or if you want to see a match in action, check out this gold medal match from Rio 2016!