I have a problem, guys.

Let's face it: attending an Olympics is a once-in-a-lifetime opportunity. I know that LA2028 is eight years away, but who knows where I'm going to be in my life? Maybe I'll be married with children!

(Ha. I just made myself laugh. Moving on.)

Regardless of what the future has for me in 2028 (and no, going to Beijing, Paris, or Milan/Cortina is not happening), I have plane tickets booked for three weeks in Japan, and I'm going to take advantage of it.

One year ago, I was terrified that I wouldn't be able to buy any tickets. Now, I have no worries! Well, maybe one: that I spend too much money.

This past Thursday CoSport did another big drop of tickets, and I make it a routine to get into the queue. It's a randomized lineup, so I ended up 1000 people behind. That's a nice thing because it basically told me I wouldn't get the Big Ticket Events.

With that in mind, I knew I wasn't going to be throwing away a bunch of money to get one of those giant events. Actually, I've made it a rule: if tickets are triple digits, I really have to think about it, and I make myself more inclined to decline.

I got in the website about 45 minutes after the virtual queue opened, and I was surprised to still see one Big Ticket Event still available: swimming! But thanks to my self-policing, I saw that the B level seats were running over $300 for evening swims.

You might say, "Claire! Those are the event finals - of course they'd be $300!" But NO! Because of NBC and the USA, evening swims are actually preliminary swims. Just like Beijing2008, the event finals in swimming are going to be in the morning so that it can air live in the United States in primetime! (As well as the rest of North and South America. But you know that NBC and the USA steered that ship.)

That means that those $300 seats weren't even for medal events! No, thank you.

I browsed the rest of the tickets, and there were a lot of them! However, almost all of the tickets were triple-digit prices and none of the events were terribly enticing. Back in 2016 I had put rowing in my priority list, but even with rowing tickets still available, the heat issue has changed my mind.

I looked carefully at boxing (those masu seats - since boxing is taking place at a sumo arena - are still making me think) as well as rhythmic gymnastics, volleyball, and more track and field. And while it was appealing to watch more track and field, the prices were crazy. Take a look at the prices for the session including the Men's 100m Final: 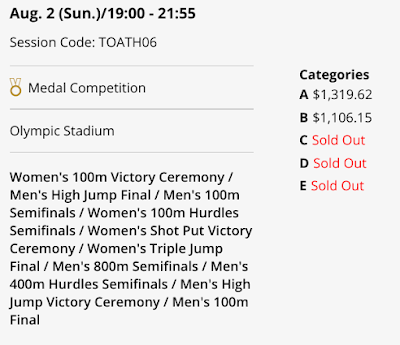 But one of the events actually had tickets that fit in my price range (i.e. less than $100) and also worked well in my schedule: diving!

I picked a day when I'm going to be in another part of Tokyo in the morning, but the Tokyo Aquatics Centre is actually closer to my hotel (they're on the same side of the river), so it'll be a little easier to get myself back after a fun day of events!

Speaking of hotels...I have now officially booked all of my lodging for my three weeks in Japan!

In Tokyo I'll be staying at four different spots, and I'm covering the gamut of business hotel, hostel, and capsule hotel! I am especially excited to check out a capsule hotel, because I've heard so much about it and I am looking forward to checking one out for myself.

And finally, the decision was made of where I was going to travel once the Olympics were done. 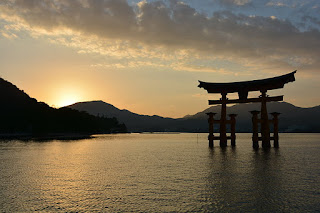 In a future blog I'll talk more about that leg of the trip. In the beginning stages of that trip planning, I am very excited for all the things I can do there. And history has a biiiiiiig part to play in that planning!