A History of Lighting the Cauldron: Part 3 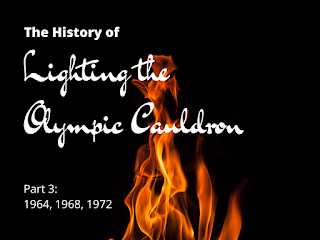 Part 3 of our "Lighting the Olympic Cauldron" series takes us to two countries recovering from world war defeat and another in the midst of its own revolution.

Tokyo 1964: You'll Hear More About This One in Five Months

This was the first Olympics to be held in Asia, so the torch relay spanned many Asian countries, including India, Burma, Thailand, Malaysia, the Philippines, and Taiwan before getting to Japan. (China still was not participating in the Olympic Games, and thus was not involved in the torch relay. However, Hong Kong, which was still under British rule, did have the torch go through.)

The cauldron for this Games was built six years beforehand by a Japanese family, Mannosuke Suzuki and his son, Bungo. The reason it was constructed so early was because it was also used in 1958 for the Asian Games, so it's different from the ultra secrecy that the cauldron reveal now possesses.

It was a large metal cone of just over two meters high. It was lit by Yoshinori Sakai, who never participated in the Olympics. However, the reason he lit the cauldron was because he was born on August 6, 1945. That was the day that the United States bomber plane Enola Gay dropped the Little Boy atomic bomb on Hiroshima. After a few days, the Japanese surrendered to the Americans, finally ending World War II. Sakai was born outside of Hiroshima, a sign of hope on a dark day.

The cauldron was removed from the former national stadium in 2011 and moved to Ishinomaki after the tragic tsunami of 3/11, and returned to Tokyo outside the new Olympic Stadium last year, where it stands beside the cauldrons of Sapporo 1972 and Nagano 1998. 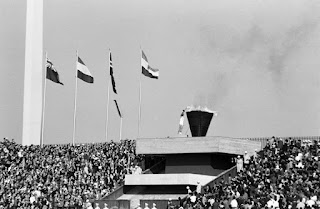 This torch relay was the most interesting, because the organizers decided to track the life and voyage of Christopher Columbus to the New World. (Mind you, this is 1968, while Columbus' treatment and interferences with natives were largely ignored.) It traveled through Genoa, Italy; Barcelona and Palos, Spain; and San Salvador, El Salvador before getting to Mexico.

The cauldron was lit in the Opening Ceremony by Enriqueta Basilio, the first woman to light the official Olympic cauldron. Other women had lit adjacent cauldrons, but not the main cauldron. Instead of height, the cauldron was incredibly wide, with the flame itself in the caved portion in the middle. 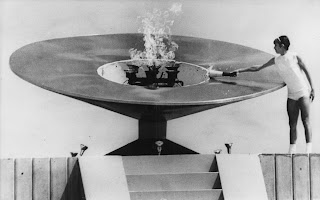 The Munich Olympics were West Germany's effort to distance themselves from the Nazi Games of 1936. Pastels were the color scheme instead of red, black and gold. Security was dressed in leisure outfits. And there was a lot of synthesizers. (Just look at the video below!)

However, one Berlin tradition that carried on was the torch relay and cauldron lighting. By this time, the ceremony was less about German tradition and more about Olympic tradition. It grew out of its origins and became its own thing.

When the cauldron was lit, it was lit by European Günther Zahn, but was accompanied on his run around the track by four athletes from the four participating continents (well, they combined two of them, for some reason): Kipchoge Keino (Africa), Jim Ryun (North/South America), Kenji Kimihara (Asia) and Derek Clayton (Oceania). Then Zahn went up to the top of the stadium to light a very simple cauldron.

...No. But it will be in less than FIVE months!