Note: I am writing this as a "short" writing example for some students that I am substitute teaching this week. But the subject has been on my mind! 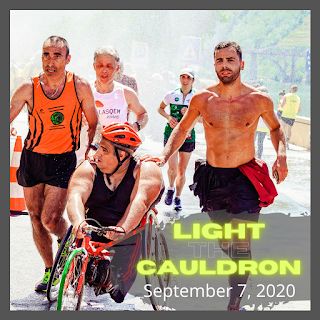 The fall of my freshman year of high school, one of my classmates was in a car accident and lost the ability to use her legs. She returned to school a few months later in a wheelchair, and our class rallied around her. She was exactly like she had been before the accident - the only difference was that she was wheeling around the buildings.

Adjustments needed to be made so that she could do things just like the rest of us, and I don't think anyone minded. She was in our touring choir, so either the churches needed to be handicap accessible or some of our stronger seniors carried her around. When we had end-of-semester concerts and graduations in the gym, the stage that was set up now needed a ramp. When it came to parties, chapel, classes, or even attending the football games, everyone made sure she could be included.

As a result of this, I have always been much more used to adults and children with disabilities than some others. The person could do just as much as an able-bodied person. This same girl from high school also became a teacher, and it wasn't uncommon to see her driving and parking her car to attend our teacher's conferences!

This long introduction brings me to my main subject: the inclusion of para-athletes in sports.

While some people wouldn't bat an eye at someone with a physical disability nowadays, it took a very long time for that to be the case. Buildings for a long time weren't built to accommodate wheelchairs, so those people either couldn't get in or needed to find an alternative method. If a person didn't have a limb and wanted to participate in a sport, they needed to work with a very awkward prosthetic. And to make things worse, people often ostracized or excluded them because of their disability.

It has been wonderful to see, just in the past ten years, how much things have changed.

I recently watched a documentary, Rising Phoenix, which is about several para-athletes' quests to compete in the Paralympics of 2012 and 2016. The documentary is on Netflix, and I highly recommend that everyone watch it.

It did the wonderful double: it both showed the "normalcy" of these athletes (whatever we call normal these days), but also displayed their extraordinary ability. One athlete, Matt Stutzman, was born with no arms, but still competes in archery by shooting the arrows with his feet. He's just an average Joe...but he can do things with his feet that no one else can.

The stories are (mainly) not projected as sob stories, like some American reality competition shows. (A British film studio made this documentary.) The people are real, and the sporting prowess they show is astonishing.

Happily, this is not the only place where I've been hearing about para-athletes. The social media for Tokyo 2020 has been heavily promoting the Paralympics, now that they are one year out. I now follow the official Paralympics Twitter account, and not only does it get excited for the Games, but it also retweets the accomplishments of para-athletes.

My favorite instance of para-athletes starting to emerge into the spotlight is in athletics. (Do you expect any different?) I have been joyfully watching all the athletics competition that has been happening all over Europe, and have noticed in a few of those competitions (most notably yesterday's Continental Gold Tour stop in Poland) that para-athletes not only have had events broadcasted, but also have been competing alongside able-bodied athletes.

Some might think of this as demeaning. For example, in the shot put competition, Ryan Crouser put five of his attempts over 22 meters. The para-athlete, Bartosz Tyszkowski, put the shot ten meters shorter.

But I think the para-athletes are aware of their strength and power. To Tyszkowski, it wasn't about beating anyone. It was about being out there and competing.

I, for one, would love to see even more of these hybrid and para-exclusive events broadcast even more, with commentators providing more information and seeing the competition through to completion. Sometimes these kinds of events are in the schedule before the TV or streaming begins. Why? Can't it be included?

The para-athlete movement is ramping up to new heights it has never experienced before, but it doesn't mean that it's reached the peak. It's up to us to ask for para-athletic events to be broadcast, para-athletes to be highlighted and followed, and support the people with disabilities that we see on a day-to-day basis.

But it's still fun to see the progress being made!

This is the Light the Cauldron blog! Starting in 2021 I will post regularly every week about the sports of the Olympics and my plans to attend the 2021 Tokyo Games. Follow me on Twitter as @CauldronLight and on Instagram as @lightthecauldron!