What Is It? A Light the Cauldron Halloween Special

For those not aware, Izzy was the mascot of the 1996 Summer Olympic Games in Atlanta. The organizers wanted to refrain from creating a mascot that was too reminiscent of other mascots in America. They wanted to make something unique.

And boy, did they! 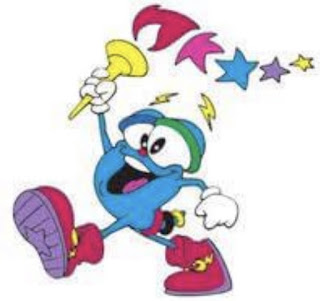 Critics and fans were not fans of this mascot from its reveal at the end of the Barcelona 1992 Games all the way till the cauldron was extinguished in Atlanta.
But you know who Izzy was made for? Kids!
I was one of those kids in 1996, and I was raised on Animaniacs - another set of cartoon characters that weren't meant to represent any sort of animal (though many people on the show called them dogs - they weren't). Cartoons were kooky, animation styles were all over the map, and Izzy just represented another one of those animation styles. And this one played sports!
While the image above was the image broadcasted to the world the most, Izzy also was drawn (as all mascots of this era) performing the sports of the Olympics. And, yes, they did make a 30-minute cartoon special to get those kids excited for Izzy and the Olympics!
It worked, too. Atlanta 1996 was the first Olympics that I actually watched. I remember watching Amy Van Dyken and Michael Johnson win their medals. And I remember being confused as to why everyone was so misty eyed when a guy named Muhammad Ali lit the cauldron. Who's that guy? Is he important? Why is his hand shaking?
Some of that interest - and the interest I have now in the Olympics - can be credited to Izzy.
Sometime last year, I was busy defending Izzy again - as I usually do. And I made a bold statement: "I am going to dress up as Izzy for Halloween next year!"
This was a bold move from someone who doesn't really celebrate the holiday and hadn't constructed a costume since 2013. (I was the Ninth Doctor from Doctor Who!) In 2019 I just wore a hoodie that made me look like Leonardo from Teenage Mutant Ninja Turtles, and I got it at a Goodwill and it was size 2XL so I was swimming in it! But this year would be different.
That vow stuck in my brain and would emerge every month or so, reminding me that October would soon arrive. I was still pondering exactly how I would do it. Obviously, I wouldn't make a full "furry" costume, like volunteers wore in Georgia. Nor would I mimic the style of a stuffed animal.

Instead, I'd do something called "bounding," where a normal outfit reminds people of a specific character. This is a very popular fad in the Disney world, where they used to actively promote "Disney-bounding" in their parks. If someone wanted to be Minnie Mouse, for example, they would put on a red dress with white polka dots, yellow shoes (high heels if you wanted to be daring), and some mouse ears with a big shiny bow on top. It didn't matter that you didn't wear whiskers or a mouse snout - what mattered was that you emulated Minnie.
So I would try to emulate Izzy. And I would need several things:
Honestly, the hardest part was the bodysuit. I wanted to find something that was just the right color, and that was really hard! I had a few purchase failures. But as I searched on Amazon, I found giant red shoes that didn't look like giant red shoes! Actually, they were branded as red high-top running shoes, but they looked so weird that I knew they'd be perfect. I could use leggings to go into the high-tops.
Add some yellow tape to the outside, and that's done. 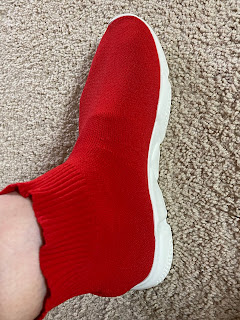 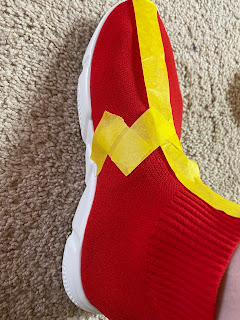 Eventually I was able to find a matching lounge set , which was the perfect color for Izzy. The only issue was that the shirt was short sleeved instead of long-sleeved. But I was fine with that.
Izzy has a tail with three of the rings on it, and I was not keen on wearing a tail with donuts on them. But sometime in August or September I had a glorious thought: why not layer some tutus??
I ended up finding a nice yellow tutu and then a red-black striped tutu. The red-black one is of much nicer quality, and I can see myself wearing it again. The yellow is not as good quality, but I might hang on to it for another outfit. Or I'll give it to one of my nieces. They'd probably use it more! Because the red-black tutu was a little thicker, I put that one on the bottom and layered the yellow one on top. 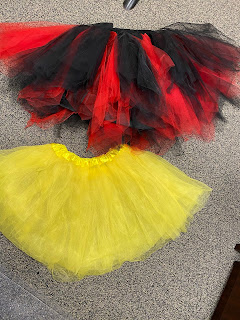 For gloves, I was going to use some old handbell gloves that I know I could find at my parents' church, but I forgot when I was home a few weeks ago! So instead I used my big white ski mittens. I seriously considered cutting off the black tightening strip, but remembered that I still use those mittens for skiing and tightening the mittens on my wrist really helps keep in the warmth. So they stayed.
(And I apologize - in some of my pictures I forgot to have them on!) 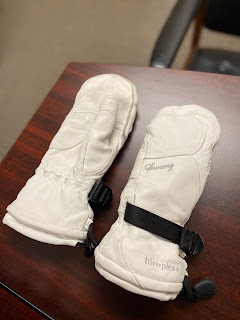 While three rings are on Izzy's tail, the other two - blue and green - are his eyelids. That was easy - I would buy giant blue glasses (giant to emulate his giant eyes) and find a way to make one of them green. I ended up doing that with green duct tape! 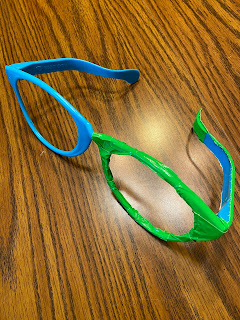 To do those weird eyebrows, I bought a headband with two sets of feathers on a spring. I cut off the feathers and used that yellow tape to make lightning bolts. These would sit on my head, which could mimic the cartoony style! 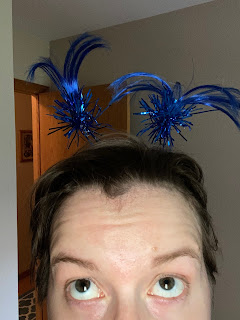 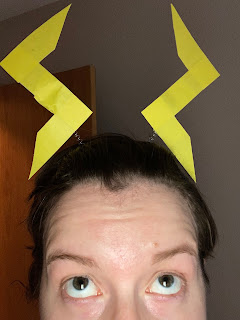 I wanted to find a clown nose, but I wasn't about to go onto Amazon and buy a pack of clown noses or overspend for a piece of red foam. I was going to buy one at my local grocery store when they set out their Halloween stuff, but they didn't have them! I was going to do a tube of red face paint when I realized that when I was at work, I'd be wearing a mask. (Conveniently, the disposable masks are almost the same shade of blue of my shirt-leggings combo!) So I just took a red permanent marker and drew an oval at the bridge of the nose!
And just like that, my costume was complete! But I wanted that torch prop.
Digging in my school's gym closet, I found a ball-and-cup piece of equipment where the cup was yellow and perfect for a torch. Then I grabbed some tissue paper and crammed them inside. I think when I do this again, (This is a costume you don't just wear for one Halloween, after all) I'll find a way to stream the tissue paper out of the yellow cup. But for this time, I was okay with what I had. 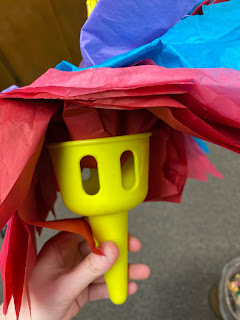 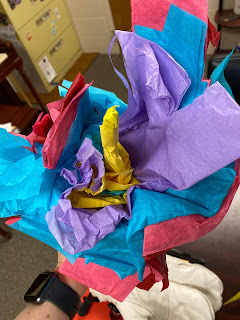 I did end up carrying a picture of the original Izzy so that people could see what I was supposed to be. But I still took a lot of pride in putting together a nice costume! And almost every part of it was purchased on Amazon! 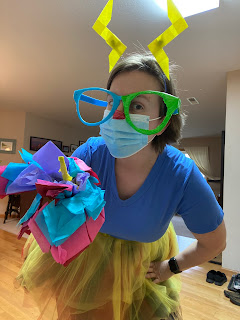 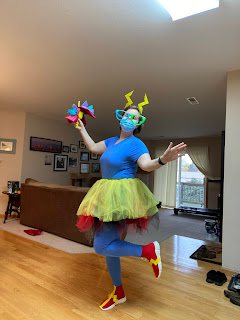 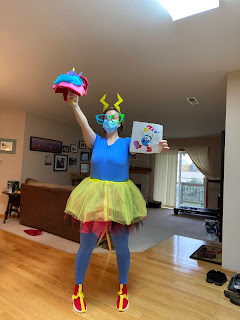 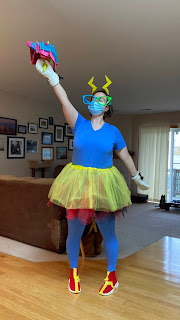 I don't think anyone thought that a mascot from 1996 would be brought back to life in 2020, but here I am! And I'm pretty proud of it.
What crazy thing have you done to show your support of any aspect of sport? Let me know on social media! Follow me @CauldronLight on Twitter and LightTheCauldron on Instagram!
Costume Halloween Mascot Olympics